...AND THIS TIME IT IS THE CORRECT SHAKESPEARE!!

So, as I referenced in my last blog on music and playlists, there was another show that was already in the works and for which I had started to put together a playlist.

As some of you have already seen on the Facebooks, I WILL be returning to loving embrace of the Bard Of Avon, and actually in an adaptation of the play that was my first professional show in Chicago (and also where I met my future husband...everyone say "AWHHHHH!")

Illyria is an "adaptation" of Twelfth Night being produced by EDGE Theatre (the folks who did MacSith) with the help of Otherworld Theatre Company (who are responsible for A Princess of Mars). This time through, I will be tackling the "Feste" roll, named here "Amethia".

As well as being a typical Shakespearian Fool (i.e., smarter than 50% of the people she is on stage with), Amethia is a land-mermaid, able to cross the border between ocean and land, and probably has more than a little Siren blood in her veins. Along with being in a body suit...again...the make-up is AWESOME! 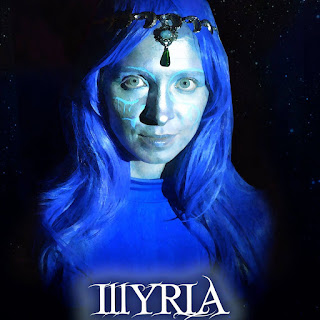 Anyway, this is a a list that is closer to the Shade playlist of MacSith, and I was actually pleasantly surprised by the number of sea, ocean, and water songs I was able to put together.

Therefore, without further ado and in no particular order...

1) "Miracle" by The Mediaeval Baebes, Illumination
The Baebes can be hit or miss with me, but I LOVE this song as a bit of a theme song for the entire show. It talks about wising up in who and how you love; instead of blindly loving what you think you should love, true beauty can be good, "giving love his sight and striking folly blind".

2) "Maelstrom" by Sirena, The Odyssey
It is a deep wish of mine that these ladies return to the Ren Faire circuit. If you had a chance to see them, then you know how wonderfully magical they were. "Maelstrom" was on the playlist for Sarkoja, and was a no-brainer when putting on together for Amethia. "For the demons below you doth wake, and the deck that you stand on doth quake..." Don't mess with the forces of the sea.

3) "Siren Sky" by Sirena, The Odyssey
I have been IN LOVE with this song from the minute I heard it, and knew instantly that it had to accompany Amethia. Whereas "Maelstrom" is about the force and vengefulness, this is about a different power. Not to spoil TOO much, but it is Amethia that saves Viola from the storm that wrecks the ship, and THIS is the song that, if we had the time to do a 60-second rescue montage, I would love to be playing as it happens.

Mermaids can lure some to their death, if they deem them unworthy. Those that have special spark, about them, however...

4) "Drawn To The Rhythm" by Sarah McLachlan, The Celtic Circle, Vol. 2
Amethia is incredibly powerful, and there was talk about how she does serve Olivia, but it is very much an Ariel/Prospero-type relationship, where there is a bond, promise, or geis that keeps this creature, who can rescue people from not-so-natural storms, as a SERVANT to someone. This song is a little sad, illustrating the song that keeps drawing her back to the ocean and away from Olivia's court.

5) "Haul Away Joe" by The Muses, Passing Time
I figured I needed one or two good, old-fashioned sailing songs on here, and this one was juuuuuust clean enough yet still dirty enough to be fun.

6) "Sailor's Prayer" by The Muses, Passing Time
Appease me with a song, Mortals. It may just save your soul...and maybe your life. No promises.

7) "Master of Tides" by Lindsey Stirling, Shatter Me
Ms Stirling is very quickly becoming like Mr McCreary (who, I will admit to being surprised myself, does not make an appearance on this playlist). Fun and poppy, energetic and full of all sorts of exciting beats, her songs can fill any slot on a playlist and only make it better. Here we have a sea-shanty beat, but the violin sings and dips and soars and speaks of something hidden in the depths, just waiting to surface...

You know what...just check out the video; I won't even make you search for it: https://www.youtube.com/watch?v=RrutzRWXkKs

8) "Dangerous" by Thomas Bergersen (feat. Linea), Vanquish
Here's the thing: you know that rule about how the most beautiful flower is often the most dangerous? This holds true beneath the sea, too.

Don't come into my element and expect to find me an easy target.
Don't see the fool and think she can be easily bamboozled.
Don't see the beauty and miss the danger.

You are dangerous. So am I.

So, there she is. Amethia in song. Come and watch me seduce, fool, and school mortals and fairies alike when Illyria opens.